Like the guy in the musical Paint Your Wagon, “I talk to the trees, but they don’t listen to me.” This is probably less surprising than meeting someone who listens patiently until the trees talk to him. Daniel Haché is an unassuming guy from these parts who lives in a wooden home he built himself… 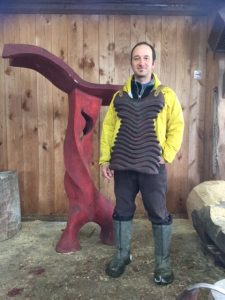 Daniel Haché in his workshop with Acadian instrument

Like the guy in the musical Paint Your Wagon, “I talk to the trees, but they don’t listen to me.” This is probably less surprising than meeting someone who listens patiently until the trees talk to him.

Daniel Haché is an unassuming guy from these parts who lives in a wooden home he built himself and works in a wooden studio he also built for himself on a tract of land that was his reward for a big commissioned wood sculpture.

He found his passion for the work at the far end of a long journey he took at 21, hitchhiking on his own to the coast of British Columbia. While he had carved some totem poles in high school, it was out west, on the Powell River, that he was first stunned by the power of big chainsaw-carved artwork. That power kept him there for three years while he began a lifelong quest to teach himself, and then to refine, the techniques that would lead to his mastery of the art. And no small part of his technique was ‘listening’ to what a tree was willing to become.

But he never lost his connection to his Acadian origins and his roots in Quebec, and thereto he did return. His medium of preference now is the Loyalist white pine, which historically was used for masts and as a symbol of British colonial power — ‘Even if you owned land’, he says, ‘you didn’t own any white pine that grew on the land.’

“Carving is my source of income,” he says, “but my free time is spent practising the fiddle, playing (Cajun) percussion, and becoming a good didgeridoo player”, with the band he calls “Soulwood”.

When Au Diable Vert, Glen Sutton’s ecotourism and outdoor-adventure destination, was taken over by Jeremy Fontana, a Montreal adman who was one of the mountain lodge’s most loyal guests, and his partner, biologist Julie Zeitlinger, the area’s most iconic image was Gilles Degens’ The Rooster, a hilltop “ice-storm sculpture,” so-called because it was built with huge branches that had fallen during the record freeze of ‘98. Degens passed away just after finishing anchoring it with rocks, and Daniel, on-site as artist-in-residence, was eventually co-credited with the sculpture for his imaginative ways of strengthening and preserving it.

Another hard winter, though, felled the bird, and Jeremy, who had put a lot of work into expanding the resort with tree houses and other nature-oriented accommodations, and giving it a more versatile for-all-ages, four-seasons appeal with 50 highland cows from Scotland, new kayaks for paddling the Missisquoi, and even a vélo-volant for cycling through the treetops, decided to make a clean break with the past and have another Coq created by Daniel in the spirit and location of the original. And last year, a white pine 44 inches in diameter was discovered. “It was 140 years old,” says Daniel. “Yes, I counted the rings.”

After meditating with the tree, he went to work with typical care, starting with a 3-D clay mock-up of his vision, and the astonishing result was installed in the fall. After it had weathered the winter, a process called ‘roasting’ was applied to scorch it and strip the tree-bird down to its dark veins. When a crane (no relation) weighed the result at close to four tons, it was clear that Le Coq also needed a substantial concrete base, and 256 cubic feet were delivered by two full cement trucks.

“Commissions often come from trees that want a second life,” says Daniel. Recently he was introduced to one such that proposed itself as a graceful giant Möbius Strip. “I’m not starting with a blank page; I’m working with what was alive. Hundreds and hundreds of carvings have created my vocabulary. And working with international sculptors has expanded it. So I’m not dictating a shape — I’m trying to relate to the wood.  And when something happens, a hiccup, a piece cracking … I accept that this was part of the relationship.”

That conviction derives in part from the Queen Charlotte totem poles, whose makers honoured the context of vines and roots, the organic life of the outdoors. “We are not here to be eternal,” he says, “but we are privileged to be witness to lives larger than our own.”