Winter’s Coming, and so Sauerkraut

Making sauerkraut is a spiritual endeavour. First you must become inspired, and then you must gather the few necessary ingredients. After that you must settle into the rhythm of production, hypnosis by repetition. Finally—by equal parts proximity and magic—the fermentation occurs of itself, with little help from me. Acknowledgement of the mystery, nature-orchestrated for over… 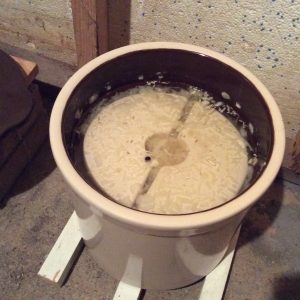 Sauerkraut in the making

Making sauerkraut is a spiritual endeavour. First you must become inspired, and then you must gather the few necessary ingredients. After that you must settle into the rhythm of production, hypnosis by repetition. Finally—by equal parts proximity and magic—the fermentation occurs of itself, with little help from me. Acknowledgement of the mystery, nature-orchestrated for over thousands of years.

Whether sauerkraut—literally “sour cabbage” in German—choucroute, chucrut, or crouti, in any language it means fermented cabbage. The Chinese were making and eating it 2,000 years ago, using rice wine in their fermentation. Then it drifted west, fuelling those raider tribes from the East—Attila the Hun, Genghis Khan, Tamerlane, the Tartars—until finally arriving in Germany and France. That’s where the dry-cure method took hold, how most people make it today.

In late September we were having our after-breakfast breakfast at that wonderful cantine in the far corner of Sutton’s Saturday Market, and the autumn chill put me in mind to make sauerkraut. Soon. Resolution. I had started with four cabbages last time, which had made a full 10.5 lbs. Too much. So this time I bought only three cabbages.

But just because I was inspired didn’t mean I was ready. I had plenty of salt but not enough caraway seeds, and I had no juniper berries at all. No matter. Only a walk away is Au Naturel, my last-minute friend-in-need purveyor of all things spice; they always have what I’m missing. So a quick walk made up my deficits.

I set up in the kitchen: food processor, scale, measuring spoons, a mixing bowl, my ceramic crock, and a couple of beers, too, and some music: A Love Supreme, John Coltrane, 1965. I set to work, shredding, weighing out batches of shredded cabbage, fisting, bruising and scrunching into each a measured portion of salt, and then dumping the gritty mass into my crock and pressing it level with a potato-masher. A sprinkling of caraway seeds, a toss of juniper berries, one layer finished. I began again, a next layer, then a next, and another after that, over and over. The squish-squash of the cabbage moulting its moisture added treble to Jimmy Garrison’s bass and Elvin Jones’ drums. Yet another layer, and another. I, they, we driving forward. Pursuance.

Just two of those mammoth farmers market cabbages yielded over 12 pounds of shredded cabbage, filling my crock higher than before. (Thump: me setting aside the third cabbage for another day.) Then I laid the two heavy half-donuts of un-enamelled ceramic onto the mass, pressing, squishing, weighing down the cabbage in the crock. This cabbage was so fresh and full of water that the liquor was already making a play to submerge the weights! Too much salt? It will be fine. Assurance. The mystery expiates our human failings.

That was two weeks ago. Today, Coltrane’s mesmerizing saxophone and McCoy Tyner’s syncopated piano strive to bring back the day, me writing this, trying again to inhabit the mystery. But it’s difficult. The scratchy feel of gritty, salty cabbage between my fingers is hard to replicate; the scent of caraway and juniper is missing, too. So I step down to the basement, in rhythm, finding the dark corner where the crock sits. I flip on the light and lift aside the heavy lid, my feet tapping to Coltrane’s reedy notes. There! I breath in the salty-turning-sour fumes rising from the bubbling surface. There it is! The ancient mystery. Magic. Psalm.