The View Through the Trees

Enjoying spring hiking was an evolution for me. There are disadvantages, but there are a lot of things to like about it. Let me take you back 30 years to explain. When I moved to New Hampshire, three decades ago, I soon began to climb the 4K-foot peaks of the White Mountains. It was nice,… 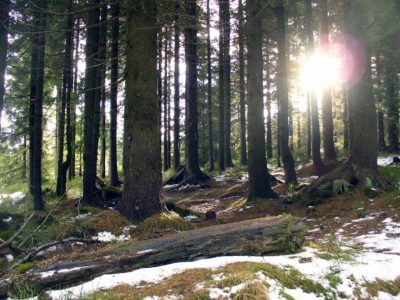 Enjoying spring hiking was an evolution for me. There are disadvantages, but there are a lot of things to like about it. Let me take you back 30 years to explain.

When I moved to New Hampshire, three decades ago, I soon began to climb the 4K-foot peaks of the White Mountains. It was nice, mapping loops encompassing several peaks, and ticking off peaks on the list. But there was one thing I didn’t like: until you get above the tree line—about 4500 feet in the White Mountains—most of the peaks, let alone the trails, are tree-covered. There are sparse viewpoints along the way. Out of the 48 peaks validated by the Appalachian Mountain Club, only 17 reach or exceed 4500 feet. So, there is a lot of hiking in the trees.

But I stuck with it, eventually climbing 37 of the 48. I got accustomed to the White Mountains, the long slog through canopied and dappled trails. There’s a lot of beauty—streams, birds, flowers—but not views. Before the age of hand-held GPS devices, I got pretty good at tracking my progress with a topographic map and an altimeter, trying to take account for weather that affected barometric pressure.

The game-changer came in 1997, when I walked Hadrian’s Wall in northern England, east to west like it was built. This was the wall the Roman emperor Hadrian had built to keep the Picts—precursors to the Scots—out of the most-northern part of the Roman Empire. He began it in AD 122, and much of it is still there! Beyond the history, and the wonderful Alfred Wainwright-esque guidebook, there are expansive views!

There was a practical reason for where the wall was built: this is a pinch-point of the island, so you can make a coast-to-coast barrier by building a wall only 76 miles long. It was also about the views north to the Pict enemy. As a hiker, you could see for miles, and all day—a rain storm over here, a sunbeam over there—and you could see miles ahead, where you were going, and miles back, where you had been. You could even decide, by sight, whether the pub lunch was worth the effort of climbing down and up.

Frankly, when I got back to New Hampshire, I was bored with the White Mountains. Except for the Presidential Range, it seemed a lot of effort and much less reward. I eventually hiked two more long-distance trails in the UK—the West Highland Way and the Coast-to-Coast Trail—becoming less and less enamoured of tree-covered mountains, wherever I found them.

But back to spring hiking. I’m not a skier, so after a long winter, I really want to be outdoors! Hiking in the spring is about visibility: buds haven’t turned into leaves, and the undergrowth is not yet developed. You can see not only out of the treetops, but you can see through the woods, whether on the level or up and down a slope. You might even see some far-off wildlife that hasn’t seen you yet.

Yes, it might be wet, with little heaps of melting snow, muddy trails, and marshy patches of vernal melt, all with lots of matted leaves. But you can see! As the season progresses, you can move up in elevation; when the bottom slopes are developing, the higher slopes are still bare. Eventually you lose the view out of the treetops, and you lose the view through the trees to undergrowth. But by then it’s summer. I’m not as vigorous a hiker I once was, and I don’t like too much heat or crowding. So spring hiking is the thing for me.

Always be sure you know the rules of whatever land you hike on. In spring, certain trails may be closed due to risk of erosion.