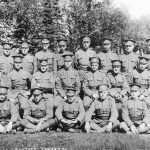 The year 2014 marked the 100th anniversary of the start of what became known as the Great War. The anniversary made the headlines all year. Rightly so as more than 600,000 Canadian soldiers served and 66,000 lost their lives without mentioning the thousands wounded physically or mentally.

Mr Jocelyn Vachon, son of Mrs Denise Vachon of Sutton, published a great article in volume 20 of Heritage Sutton’s historical booklets on our town’s contribution to the war efforts. Sutton and it’s township had a population of 3906 at the time. Some 160 Suttonites served in the Great War and twenty-five died in action, the first casualties occurring in 1915.

The Sutton Legion with the cooperation of Heritage Sutton would like to remind all that this great conflict lasted from 1914 to 1918 and that sons of Sutton lost their lives in each of these sombre years of our history. It would only be appropriate to honor the memory of those who made the ultimate sacrifice by inviting the families who lost a son to participate in the ceremonies of the Day of Remembrance in November. This would mean 3 families in 2015, 3 families in 2016, 7 families in 2017 and 11 families in 2018.

Therefore Sutton would see recognized at the 2015 Armistice ceremonies, the families of Gordon Cook killed in action (KIA) on April 24th 1915, Joseph Hall (KIA) April 24th 1915 and George Whitford (KIA) October 20th 1915. Descendants, close or distant, are encouraged to contact the undernamed to provide any further information they may have on their lost WW1 relatives, this in order to detail more of their lives in Sutton.  Furthermore they will be encouraged to participate in the coming Remembrance ceremonies.

Much has changed in Sutton since 1918 and many families who had members who saw military service on WW1 have settled in the area since. Their memories should not be forgotten and your Legion will gladly include their names on its lists.

A dossier is being prepared for the web site of Heritage Sutton (www.heritagesutton.ca), which will include Mr Vachon’s article referred to above, a French translation of said article, a list of those killed in action and a partial list of Suttonites who saw service in WW1.

It is hoped that in the process of this initiative sufficient information will be provided by the concerned families for the Legion to produce a souvenir album which will eventually be donated to Heritage Sutton.

Please contact Comrade Robert Gaudreau at the Sutton Legion or at (450) 538-5030 for further information or by email at godro@xplornet.com

Sutton remembers its citizens lost in the first World War 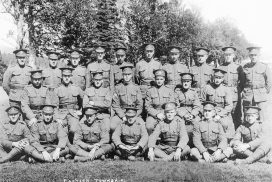 [FALL 2015] By Robert Gaudreau   The year 2014 marked the 100th anniversary of the start of what became known as the Great War. The anniversary made the headlines all year. Rightly so as more than 600,000 Canadian soldiers…
Si vous aimez, svp partager! If you like this, then please share!