The Joy of Sculpture

Guests frequently ask if I’m an artist. It’s a question as ridiculous as whether I am the much slenderer man in the upstairs photograph of a cyclist, who is really Ken Graham, Lynda’s father as a young man. No, I’m not an artist, but I know why they ask. From the side porch of the… 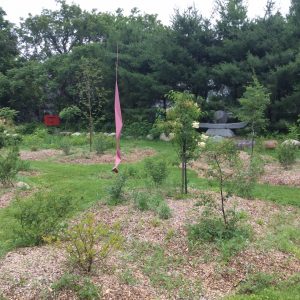 Guests frequently ask if I’m an artist. It’s a question as ridiculous as whether I am the much slenderer man in the upstairs photograph of a cyclist, who is really Ken Graham, Lynda’s father as a young man. No, I’m not an artist, but I know why they ask. From the side porch of the Gîte Vert Le Mont, where breakfast is served in nice weather, can be seen a rather prominent and inscrutable sculpture.

The sculpture comprises three separated sections of a large radiator—perhaps of a tractor—stuck into the ground in a triangle, with slabs of slate laid around the legs forming a visual base. On each section, are mounted faces carved in marble—some old, some young, some male, some female—six faces in all. The motivating inspiration is lost on all but the sculptor, but the installation almost demands that you stop to contemplate it, to discover a meaning for yourself. As Marcel Proust observed, “Every reader finds himself. The writer’s work is merely a kind of optical instrument…” So, your meaning is as valid as mine.

The sculptor is one Gampo Wickenheiser. His work was not even supposed to be in the garden, but local artist Eddie Heath knew him and invited him to bring his work to one of the Gîte Vert Le Mont’s sculpture gardens. This and a small granite sculpture, originally mounted on an iron pedestal, was brought by Gampo from Barre, Vermont, where he worked carving tombstones by day and creating his own art by night. Gampo has never returned to recover his sculptures, so they remain safeguarded by us and enjoyed by the Gîte’s guests. I tell this story each and every time someone asks about it, or asks whether I am the sculptor.

Art challenges you. It makes you stop to ponder. It stops time and causes one to daydream, to feel energy rise from the ground through you, to fire your synapses in new combinations.

In 2005, at the suggestion of Eddie Heath, Lynda Graham first loaned the land behind the Gîte Vert Le Mont to local artists. This allowed them to display their sculptures to both guests and townspeople, to perhaps attract buyers, and to clear space in their ateliers for continued inspiration and construction.

The sculpture garden continued through 2007 and 2008. By then, Lynda herself had purchased some of the sculptures. She was particularly drawn to the works of Don Davidson—now of Sutton—an artist in bent metal. His work graces the side hedge, the back garden (recently painted a brilliant red), the carpark, and forms the central, focal spire in Lynda’s newly-installed permaculture garden. (Lynda will write more about the garden in a subsequent issue of Le Tour.)

That said, the pride of the place probably goes to Eddie Heath’s granite Yin-Yang sculpture at the back of the garden. Though furthest from the house, it is a massive structure that draws the attention of all arriving in the carpark.

Between the newly-constructed garden areas—with sculptures and seating areas throughout—guests and visitors can be seen pensively wandering about and enjoying the sunlight. Birds, too, have rediscovered the area, and hummingbirds and bees buzz by doing their work.

Art serves many purposes. In the mid-18th century, when Mayer Amschel Rothschild—after 200 years, the first of his family to break free of Frankfurt’s Judengasse—made his family’s first serious money, he bought art; he wanted to be taken seriously. When another 200 years had passed, Adolf Hitler stole art for the very same reason. For we less well-healed, art is not about status but how it makes us feel, and how it takes us out of ourselves. What is meaningfully inspiring to one of us leaves another cold. And what impels him to silent contemplation might for her be worth only a passing glance.

In addition to the Gîte Vert Le Mont, there is the new Cold Hollow Sculpture Park in Enosburg Falls, VT (see www.coldhollowsculpturepark.com). And next year, there will be something even newer in Sutton. An organization called d’Arts et de Rêves has taken the formative steps to create a Parc Culturel, the entrance of which can be seen just past the Foyer on rue Principale nord, where a plot has been cleared for that purpose. (Note: As this article goes to print, the MONUMENTUM International Sculpture Symposium is underway, and the three imposing works that will result should be installed by the time you read this.)

So, go find some sculpture! Proust says you’ll “find yourself,” and I bet you will.