Getting to know your neighbours

Like everyone else, spring for me this year meant spending a great deal of time at home with my family. We decided to invest in some bird feeders – invasion of the squirrels be damned– and play host to the local population. The number of winged friends exploded as spring progressed. Watching them flit around,… 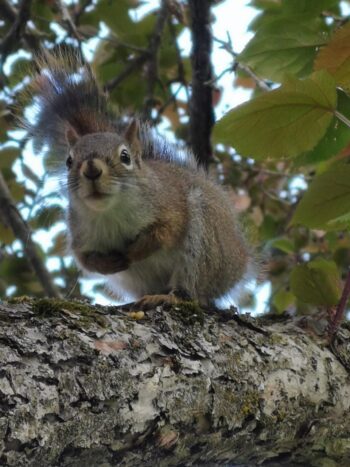 Like everyone else, spring for me this year meant spending a great deal of time at home with my family. We decided to invest in some bird feeders – invasion of the squirrels be damned– and play host to the local population. The number of winged friends exploded as spring progressed. Watching them flit around, competing for perches on the feeder, mingling with other breeds on the ground below made for a constantly changing backdrop of colour.

Sadly, a white-throated sparrow flew into one of our windows and broke its neck. When my daughter moved it she found a numbered band clamped onto its leg. She found a website where we could report it (reportband.gov) and a day later she got an email with information about the bird’s age and where it had been. A thousand kilometres and a few years lay between us and the person who squeezed this tiny bit of metal onto a leg finer than a twig. I knew that birds migrated but something about knowing for a fact exactly where this bird had been underscored the fact that they lead so much of their lives elsewhere and we treat them like part of the woodwork instead of the special visitors they are.

The white-throated sparrow may not be the most exciting-looking bird but the little patch of brilliant yellow behind its beak makes it look like it brushed on a little eyeshadow before heading out. The breed actually has two varieties (tan-striped and white-striped) and one almost always chooses to mate with the opposite variety. Sometimes white-throated sparrows will even hook up with a Junco and make for a whole different bird.

Along with the sparrows came the chickadees. The chubby, bold little birds are like squirrels, storing food all over the place for later and are able to remember thousands of hiding places. They are amazing communicators, recognizing and identifying each other and other flocks and alerting each other to danger. The more “dees” in “chickadee-dee-dee”, the more threatened they feel.

For me, spring has only sprung when my Brown Thrasher returns. A fairly boring-looking bird, like a stretched out, pale, speckled robin with a long, curved beak, but once you’ve heard the male sing you’ll never think they’re boring again. With a repertoire of hundreds of songs, they are like the car alarms of the bird world, repeating every phrase twice, and, like mockingbirds, often incorporating songs of other birds into their remixes. I usually find mine at the absolute top of a tree belting his heart out early in the morning. Every spring he has a new repertoire.

The robin is back as well. She makes her appearance when the temperature climbs above three degrees. When worms come out of hibernation and start coming up to the surface. I forgot to remove last year’s nest from under the eaves but she can’t resist the urge to build a new one on top. She hops around on the lawn, cocking her head when sees a worm and tugging with all her might to bring it home to her chicks. Like almost all birds her eyes are fixed so changing her view requires shifting her head. Her vision, like most birds, is her sharpest sense. She can only see things with one eye at a time. But she’s able to process quick movements much better than us. She is also able to see slow-moving objects, like the movement of the sun and the stars.

The ruby-throated hummingbird was probably the last to arrive. The gangly brown female turned up first and then the male, with his lovely iridescent throat – a shimmering little bullet. It’s hard to believe! A bird that weighs little more than a nickel can fly across the Gulf of Mexico in one go. They have to consume an amazing amount of calories to stay in the air. Beating their wings over 50 times a second. What they have in wings they lack in legs which are too short for them to walk or even hop.

Did you know that, as a general rule, smaller birds begin the dawn chorus while bigger birds sleep in? Because smaller birds lose a bigger proportion of their weight overnight they need to get started finding their breakfast earlier.

Having the time to watch spring unfold this year was a gift. It was also an important reminder of how well this planet works when we don’t. Learning about birds and watching them made me realize that they are not visitors in MY backyard. I bought a house in theirs.