My Introduction to Birds

My appreciation of birds began when sitting in a park in Dorval waiting for a ride. I noticed a repeating bird song in a nearby tree. I followed the sound out of curiosity and discovered a bright red cardinal singing on a high branch. Until then I had never even wondered what a cardinal sounded… 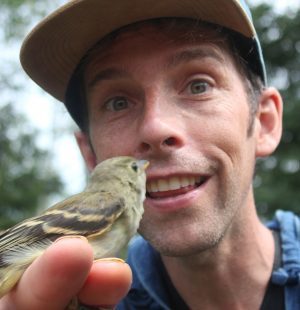 Jason Campbell and the chebec or least flycatcher

My appreciation of birds began when sitting in a park in Dorval waiting for a ride. I noticed a repeating bird song in a nearby tree. I followed the sound out of curiosity and discovered a bright red cardinal singing on a high branch. Until then I had never even wondered what a cardinal sounded like. I watched and listened to it sing as I waited. This cardinal was my introduction to birding.

After that day, I started recognizing other cardinals singing. It turns out that the cardinal has a very loud and easily recognizable song.

A few years later at about the age of 29 I spent some time working outdoors in Morin-Heights. I began listening to pick out individual songs and learned the robin and chickadee’s familiar songs. In the late afternoons a flute-like song caught my interest. It was beautiful, ethereal and mysterious – the perfect soundtrack for a forest on a lazy summer evening. Like chimes sounding from the magic of forest fairies! I followed the sound and discovered a small brown bird with a pale spotted breast walking among fallen branches and rustling the leaves. It did its best to keep away from me but did not take flight.

I bought a Peterson’s field guide of birds to investigate further. I searched through the illustrations for my evening singer and decided that it looked closest to a thrush. After a few more times listening to the bird in the forest and comparing it to thrush songs on the internet I decided that it must be a hermit thrush! That process of discovery got me hooked.

The next summer while travelling to Ecuador and Peru I signed up for a birding tour. I was amazed that the guide knew how to recognize hundreds of bird songs and calls! He could spot birds and identify them before I even suspected their presence. Inspired by the bird guide I bought CDs of bird songs. I learned to be able to distinguish the song if a downy woodpecker from that of the hairy woodpecker, a great horned owl from a barred owl! This is before I knew about phone apps. I was using books and CDs to learn more.

Next I bought a decent pair of binoculars. I soon discovered that spring is an intense period of bird activity. Birds sing more, are more active and easier to spot in the spring. The very best time is around Mother’s Day when migrating birds have returned from the south and are singing to attract a mate before the leaves fully open. I almost always hear the bird before spotting it and then observe it through binoculars.

After that, I started to notice that whenever I was outdoors and heard birds, they caught my attention. I went on walks to see what birds I could hear and identify. Then, I literally had dreams of hundreds of colourful and exotic birds flying along riverbanks. I wanted to know what birds lived around me in Sutton and what the best spots were for seeing birds within walking distance. Sometimes in the early morning there is an overwhelming variety of species. With practice I learned to recognize more bird songs and can now recognize most songbirds that I encounter in this area by ear. There is always more to learn. I feel that this interest has enriched my life by providing a connection to nature and a hobby that I can enjoy anytime!