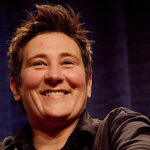 (FALL 2020]  By Peter Turner  Charlie arrived in Kingston before supper, so he would have time to prepare for his 8 o’clock meeting next morning. After checking into the Holiday Inn he retired, with his work, to the sports bar he preferred when he was in town. He went to a back table, picking up a stray copy of the daily Whig Standard on his way, and, over a welcome beer he contentedly perused the news while awaiting his food. Perfect peace.

Just as his rare sirloin arrived, he spotted an ad promoting a kd Lang concert at the old hockey arena (Don Cherry’s home ice). Problem was, the concert was tonight, at 8:00 PM. His watch already read 8:05. He’d yearned for years to see kd. What to do?

He told the server he hoped she understood his need to leave at once. As to payment, she trusted his familiar face, and accepted his promise to be back by 10:30. She also agreed to try and sell the dish to another customer. If she was unsuccessful, well, then he would have to pay for two steaks, and of course, the beer.

He ran to his car, parked several blocks away on Princess Street, and tore off to the old arena. On the way, he loudly sang an off-key Hallelujah while cursing every red light. He arrived at the arena in twelve minutes, parked in a handicapped spot (hoping that no one would be needing it now) and scurried into the box office.

While he was waiting attention from the box office lady who was counting receipts, he could hear applause and loud whistles marking the end of a kd song. Finally, the lady looked up wearily at Charlie, and said, “I really am sorry sir, but we were sold out months ago.”

“I can’t miss this,” he thought. Knowing full well that kd was the pride of Alberta, he blurted out, “Oh, dear. I just arrived from Moncton. I’m her cousin.” When he turned to leave, the lady said, “Wait, my friend, I too, am from Moncton—a long time ago. Let’s see if we can’t do something,” and she disappeared into the dark arena.

A minute or two later, she came back, followed by a skinny young guy who was wearing an oversized usher’s hat and carrying a long flashlight. “Hurry, hurry Sir—she’s between songs.”

Charlie’s heart soared. Not just in, but just the way he liked it, because he would certainly be directed to a folding chair set up at the back, thereby sparing his severe claustrophobia. Whether on a plane, a bus, or at the movies, he always sought a seat on the aisle. But now, as the usher briskly led him past the last row and down the aisle, Charlie started to fear that this might not be such a piece of cake. The further down they went, the closer he got to serious panic. At the same time, he was aware of the curious, irritated, or sometimes amused, stares from the audience.

Kd, who was perched on a floodlit stool at centre stage, started strumming the prelude to the next song. “Shit,” Charlie thought, “she’s looking right at me. When is he going to stop?” The usher stopped at the stage, and pointed the beam of his flashlight to an empty seat at the dead centre of the front row and whispered towards the folks along the row, “Excuse us please everybody,” and to Charlie, “Quickly now Sir.”

In a cold sweat, and feeling nauseous, Charlie was side stepping in, when the usher waved his arms at kd Lang, and pointed to him, and mouthed, “Look kd! Your cousin from Moncton!”

The people in the row pulled back deferentially. After Charlie dropped into his seat, he looked up to see kd Lang staring at him quizzically … while not missing a beat. For the rest of the set, which felt like an eternity, Charlie avoided looking at kd and hoped, with every song, that it might be the last one before the intermission.

Finally, after some applause, the guy next to Charlie started to move. With his eyes down, Charlie followed him into the aisle. Then he bustled and darted among others, as he headed for the exit. He felt like a halfback in the open field, except that he was muttering apologetically, “Bathroom! Sorry! Urgent! Bathroom.” Just when he spied freedom through the open door, the usher stepped in front of him.

“Excuse me sir but I have a message. After the show, Ms. kd Lang looks forward to meeting you backstage.”

“How wonderful!” said Charlie, “but right now I’ve got to have a smoke. I’ll meet you right here after the show.”

With that, he scooted out into the cool fresh air, walked gravely through the crowd of smokers, then bolted, with a feigned limp, to his car in the handicapped spot. He thought he might faint with relief as he got out onto the road.

He reclaimed his old parking spot on Princess St., sauntered back to the bar, and returned to his former table. When the server brought a nice fresh beer, she said, “Why … that was quick sir. You’re in luck. We sold your dinner to one of our employees. We’ll start a new one for you and, oh, here’s your newspaper.”

Charlie and kd , another short story by Peter Turner

(FALL 2020]  By Peter Turner  Charlie arrived in Kingston before supper, so he would have time to prepare for his 8 o’clock meeting next morning. After checking into the Holiday Inn he retired, with his work, to the sports…