Elias Truax Jr. was made of sturdy stuff. While he lived a life not unlike many of the first Loyalist settlers who came to Missisquoi County in the 1780s, his name appears in the historical record a number of times; most notably when he was a nonagenarian – a person in their nineties. Elias Truax… 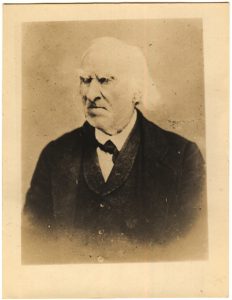 Elias Truax Jr. was made of sturdy stuff. While he lived a life not unlike many of the first Loyalist settlers who came to Missisquoi County in the 1780s, his name appears in the historical record a number of times; most notably when he was a nonagenarian – a person in their nineties.

Elias Truax Jr. was born in Albany, New York on January 4, 1772 to the Palatine German family of Elias Truax Sr. (1727-1820) and his third wife Nancy McKinney (1738-1819). For most of his life, Elias Jr. was called « Yelles »; likely from a mispronounced attempt at his own name when he was a child. Refusing to join the American Revolutionary forces, his father lost his property in New York and had no choice but to seek refuge as a Loyalist at Missisquoi Bay in 1783. Within 10 years, the Truax family had been granted land for their allegiance to King George III and settled in Saint Armand East (Frelighsburg) where they built a log cabin in the small hamlet of Lagrange. By this time Elias Jr. was 20 and father and son became the first people to cut trees and open land for farming in the Township of Dunham. They grew beans, buckwheat, rye, oats, barley and potatoes and made crude potash or ‘black salts’ from their felled trees which they sold to the commercial ashery at the Bay.

In 1796, Elias Jr. married Anna Wightman and in 1797, he received a parcel of land in Brome County as an « associate » in the Leader and Associate system of land holding. He opted to stay with his aging father however and continued farming the original acreage. That same year, Elias and Anna welcomed their first child. Between 1797 and 1817, a period of 20 years, they had 11 children. It is rare to hear stories about fathers and their children from this era but a small notation in a family record revels that he trained a bear cub as a family pet for his children!

Elias’ mother and father died in 1819 and 1820 respectively and Anna passed away in 1838. He remained on his farm and manufactured sap buckets and gathering tubs well into his 90s. In January 1864, he skated across Franklin Pond (now Lake Carmi, Vermont) a distance of 4 kilometres to celebrate his 92nd birthday; a feat he had first accomplished when he was 15. He was also in the habit of walking 9 kilometres a day to visit one of his daughters.

It was a fairly quiet life for Elias until 1866 when hundreds of Fenians came into Missisquoi County and held the region captive in the name of Ireland. Elias’ farm was on the front line and his was one of many that were raided by the marauding Fenians. He was 94 at the time. Following the Fenians’ retreat and until their return in 1870, men in the community formed a home guard called the Red Sashes whose purpose was to protect the border. Elias Truax is not on the petition to form the guard but following the 1870 victory against the Fenians, he is standing at Eccles Hill in the famous photograph of the Red Sashes by photographer William Sawyer. Remarkably, the then 98 year old Truax is pictured beside the captain of the Red Sashes, Asa Westover. Although not wearing the distinctive sash he must have had a fighting spirit worthy of respect and was invited to stand among the home guard.

In 1875, Elias Truax Jr. died at the age of 102 in Franklin, Vermont. His body was returned to Missisquoi County and buried at the Bishop Stewart Memorial church graveyard in Frelighsburg. Historian Cyrus Thomas said of Mr. Truax that « he had a good memory, a jovial nature » and that « this man affords a striking example of longevity and of the long time the human mind and body may retain their faculties. »