Le Tour first appeared in September 1983 with 16 pages of information and stories about our region. Its mission was clear right from the start – to bridge the communication gap. Those working in the tourism sector saw a rift between tourists and the local population. Visitors to the region were unaware of the region’s… 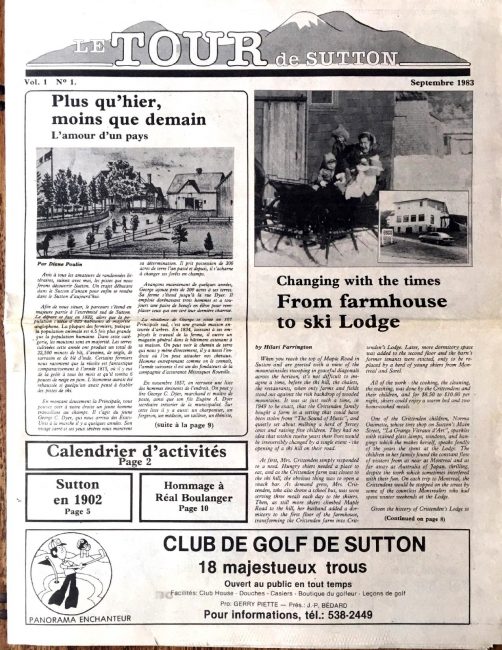 Le Tour first appeared in September 1983 with 16 pages of information and stories about our region. Its mission was clear right from the start – to bridge the communication gap. Those working in the tourism sector saw a rift between tourists and the local population. Visitors to the region were unaware of the region’s history and the burgeoning arts and culture community and conversely, the work of artists and tourism-sector organizations like museums and the newly-established wineries, were unfamiliar to the local population.

To Denis Boulanger, the then-president of the Bureau du tourisme et de congrès de Sutton (BTCS), believed a newspaper would be the answer to joining the two. Le Tour was started for the community – to bring it closer together and at the same time, to incite tourists to discover our region, to utilize its resources and to come away with an understanding and an appreciation of our arts, heritage and culture.

The dynamic trio of Denis Boulanger, Daniel Paquette and Betsey Johnston published the paper in the early years. While its name hasn’t changed, its format has, thickening, and then shrinking a bit before returning to its now familiar size. The all black-and-white format gave way to big photos and bursts of colour. The paper was first printed in Magog and then at the presses of the Sherbrooke Record until finally it could be created electronically. The years leading up to its desk-top publishing were labour intensive as the team had to write and edit their own work, paste-up and wax the layout for printing, spend a few days in Magog « putting the paper to bed » and then make the deliveries themselves.

The late 90’s saw remarkable changes in the paper. In 1998, Daniel Paquette made the decision to resign as editor, Betsey Johnson had already moved on by then and the BTCS was diminishing. Denis Boulanger suggested a partnership with Daniel whereby they would purchase the paper together and breathe new life into its original concept. The offer was accepted and the new and improved Le Tour gained in importance and popularity.

The paper returned to its larger format and Denis invited people to submit articles about culture, history and country-living. Those eye-catching images too accompanied the well-crafted words of local writers whose interests now covered topics ranging from spirituality to astronomy, gastronomy to herbalism, history to literature, and health, sports and recreation. Some writers have been contributing to the paper since this transformative time.

The paper has always been bilingual because it reflects our community and it’s always been free thanks to the devoted professionals, merchants and businesses that support its mission and vision. While the paper’s distribution was initially just in Sutton, it now is mailed to 6000 residents in Abercorn, Dunham, Frelighsburg, Stanbridge East, Sutton and West Brome. Another 2500 to 3000 copies are delivered to drop-points such as visitor information centres and in strategic touristic areas and enterprises in the above-mentioned towns, as well as in Cowansville, Bromont Knowlton, St-Armand, and sometimes as far as Bedford.

The change meant that Le Tour was more entertaining and became the source for information about the region, whether you were a visitor or a local. It helped to awaken the energy and enterprise of our fellow citizens and stimulate tourism. Just talking about hiking and biking in Sutton for example, now means that the region is known and used for its great trails. The same holds true for the success in agri-food enterprises, outdoor outfitters, boutiques and restaurants. The Domaine des Côtes d’Ardoise was just a fledgling operation 35 years ago, but reading about it in Le Tour really helped to get things going for the winery and for the Route des vins as a whole.  Promoting arts and culture events like the Tour des Arts and the Sutton Jazz Festival likewise, has created a new arts-and-culture vibe.

Daniel Paquette stepped back completely from the paper a few years ago but with the support of two professionals from the area, the paper continued to prosper. Denis Boulanger retired in 2015, but not before he invited Geneviève Hébert to accept the challenge of becoming the new owner and editor.

The paper was created so that people could learn about themselves, so that they could see themselves as others who visit this region see them. Le Tour has helped build a community and keeps us connected and informed. It leaves our welcome mats out and invites us to join and participate in each other’s current events. It promotes our products and helps us to see what an amazing region we live in.

Thirty-four years multiplied by 4 issues per year going to press (plus a few extra special editions), and averaging between 16 to 52 pages per issue, means that there has been a lot of writing, a tremendous amount of volunteer time and immeasurable creativity and energy contributed to bridging the communication gap. Denis Boulanger recalls that « 34 years ago people didn’t believe the paper would get off the ground or that tourists or locals would read it; now people say, they can’t live without it! »  Happy Anniversary Le Tour!

Sources: Conversation with founder and past owner and editor Denis Boulanger, June 13, 2017.