Lloyd Rogers sat as a Conservative Member of Parliament for the riding of Derby/Abenaki from 1980 to 1984. During that time he did his best to promote the Townships and, in particular Derby County. In the spring of 1980 a European trade mission was touring Quebec. Lloyd and his wife Margie were chosen to introduce… 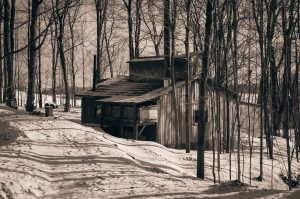 Lloyd Rogers sat as a Conservative Member of Parliament for the riding of Derby/Abenaki from 1980 to 1984. During that time he did his best to promote the Townships and, in particular Derby County. In the spring of 1980 a European trade mission was touring Quebec. Lloyd and his wife Margie were chosen to introduce a delegation of them to maple syrup.

So, at 2:00 o’clock on a brisk sunny Saturday in early April, four delegates, along with their wives, attended at the Rogers’ Farm on Kinsman Hill.  A sleigh driven by Whizzer Bugg, and drawn by Rambo and Tyson, his powerful but disturbingly unkempt of Percherons, met the visitors’ mini-bus. Whizzer (christened “Richmond)) and his brother Stukeley were now in their fifties. The Bugg boys, both bachelors, had worked the sugar place since Whizzer had retained Lloyd to defend him on a charge of uttering death threats against Oliver Brien the previous (and Liberal) MP.

In Whizzer’s defense, Lloyd had argued that if every person in  Derby County who had uttered death threats against Mr. Brien were jailed, the streets would be deserted. Whizzer was remanded for a psychiatric examination and later released on an undertaking to keep the peace.

Lloyd tucked everyone onto the three benches with blankets and buffalo robes and climbed up to stand beside Whizz. After apologizing for his lack of Italian and German, he provided commentary in French and English as the team, knee deep in fluffy fresh snow,  and farting zealously, hauled their jolly load up into the towering maples. 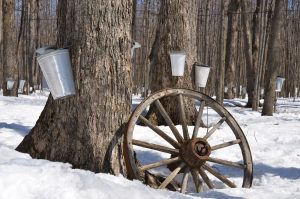 They stopped to watch seven-year old Charlie who was on snowshoes and helping a couple of farm hands gather sap in buckets and empty them into a big vat. They drank some sap, which Lloyd had laced with a touch of vodka, threw some snowballs, and cavorted about childishly, before proceeding down to the sugarhouse to observe the boiling operation. Through clouds of sticky steam they were introduced to Stukely, who was overseeing the process. After relishing some sugar on snow, the rosy-cheeked guests clambered aboard and went on down to the Rogers’ farmhouse. There, they noisily disembarked to gather around the fireplace and enjoy a couple of Lloyd’s generously poured drinks, before sitting down to dinner.

The menu featured a glorious Maple-glazed farm-raised ham, maple baked beans, and lovely thinly sliced pork rinds, “Oreilles de criss”, Lloyd explained. Before dessert, talk returned to syrup production. Benedict Hoffstetter, a Swiss dairy farmer asked,  “ How can such a simple old machinery and things like this, situated in old wood cabin with a dirt floor , produce a food product free from all of the microorganisms and toxins that exists on farms everywhere? You will know my country has been quite free of those dirts for many years. Just for an example I did not see nets over the hair heads or even hand gloves on those men. Also no baffroom did I witness.”

Margie stepped in and while apologizing for interrupting, she served her signature crêpes with maple butter along side a scoop of homemade maple ice cream slathered with syrup.

As the guest tucked in with oohs and aahs, the conversation carried on with Mr. Hoffstetter pressing Lloyd as to, “ the training of the food technicians regarding the hygienic conditions”. It was at that moment that young Charlie, in his pyjamas, happened by on his way from the TV to the bathroom.

“Hold it there my boy”, said Lloyd. “It’s past your bedtime. Come on over and say goodnight to our honoured guests”.  Then, putting his arm around the lad he went on, “ Indeed Benedict, our operation is run by the Bugg brothers whom you met.  Of course, our product is naturally pasteurized by the intense heat of the boiling. My men are human resources of incomparable caliber.  They are trained across generations of family  – quite like your Swiss cheese craftsmen I would imagine. In fact, our syrup won the first place ribbon at the County Fair last year.”

Charlie, leaning on the arm of his Uncle’s chair, and proud to participate, interjected, “ But Uncle, when my grandpa only came in second he said,  “Son, you can’t be sure them Buggs don’t piss in it.”