When Hurricane Harvey hit Texas in August 2017, it dumped 27 trillion gallons of water over the state. One of the many stories that made international headlines in the aftermath of the storm was the potential threat of 350 giant alligators escaping their enclosure from the 15-acre Gator Country Wildlife and Alligator Adventure Park in… 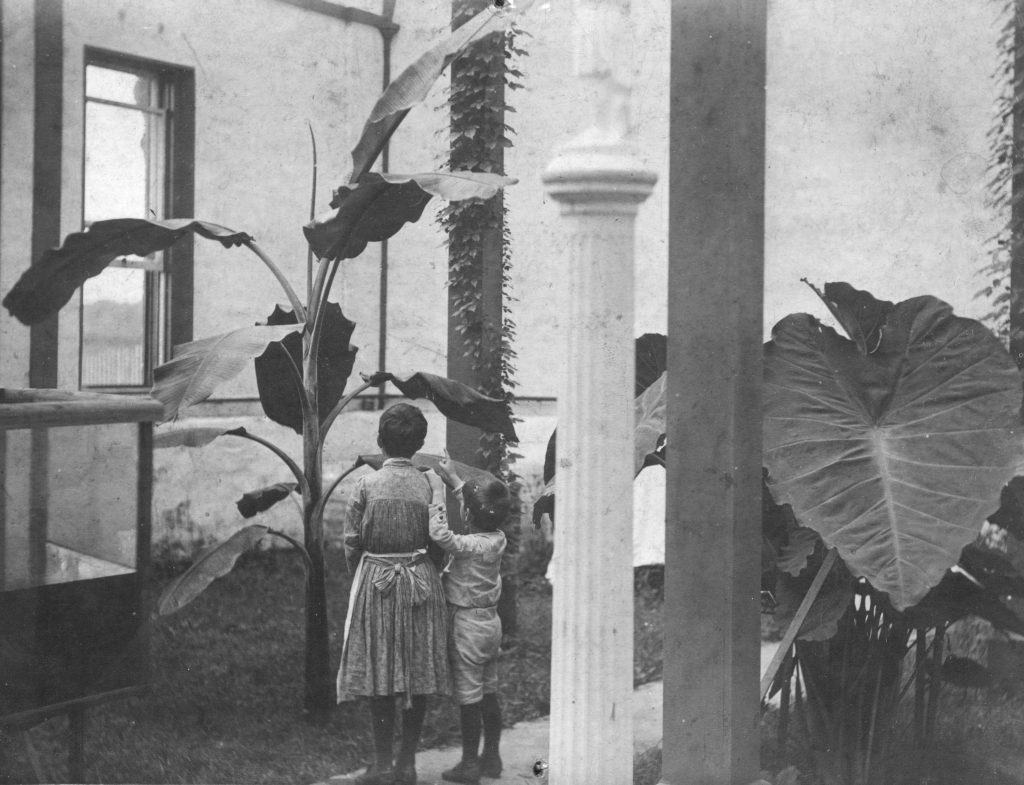 Allie Walbridge and one of his sisters standing near the alligator aquarium
Source: Walbridge Foundation

When Hurricane Harvey hit Texas in August 2017, it dumped 27 trillion gallons of water over the state. One of the many stories that made international headlines in the aftermath of the storm was the potential threat of 350 giant alligators escaping their enclosure from the 15-acre Gator Country Wildlife and Alligator Adventure Park in Beaumont, Texas. The tourist attraction officials worked around the clock to monitor the fence line that was dangerously close to being overwhelmed by rising flood waters. If water had exceeded the height of the fence, hundreds of alligators could have slipped into the local community.  Luckily for people and alligators alike, water levels crested and the fencing stood firm. While we may not have to face a frightening scenario like this in Missisquoi County, in the 1880s we did have alligators living in the hamlet of Mystic.

Alexander Solomon Walbridge (1828-1897) was the enigmatic, teetotalling machinist, builder and inventor who in 1882 erected the large, 12-sided barn in Mystic, Quebec (Saint Ignace de Stanbridge). The Walbridge Barn is remarkable in its size and by its saw-toothed edge roof line with diamond-shaped windows. The genius of A. S. Walbridge is revealed in the central space where he installed a rotating floor to streamline the unloading and storage of hay. A horse-drawn hay wagon could be led into the barn through a main entry, the floor turned to position the wagon’s end in front of a mow, then driven out of the barn the same way it came in. Through a system of cables and pulleys, a waterwheel stationed in the adjacent stream powered a drive shaft fitted with gears that supplied enough energy to operate a hayfork, threshing machine, grain conveyor and corn cutter.

Walbridge also built an industrial complex near his barn that included several mills, a brickyard and a foundry. The Mystic Iron Works employed 25 people year-round and manufactured an impressive range of iron goods such as circular saws, horse-drawn mowers and stationary and mobile steam engines.

In 1885, Walbridge decided to build a manor house to fit his social position and wealth. He constructed his opulent home next to the barn using bricks made in his own brickyard. An entry in his note book indicates an order for 460,000 bricks. While few interior images of the house exist, details from construction expenses reveal that the house had iron and copper fixtures, hardwood and marble flooring, wood panelling, gold leaf ceiling mouldings and a spiral staircase. Exterior photographs show an imposing three-storey structure with a central tower. True to Mr. Walbridge’s ingenious nature, Lakelet Hall also had indoor plumbing and central heating made possible by a system of water-powered conveyors which fed the furnace with blocks of wood. Completed in 1887, the house cost over $11,000; a considerable sum at the time.

The jewel of this extraordinary house was the enormous glass-roofed greenhouse. This two-storied conservatory was heated by a system of hot water circulating in concealed pipes under the floor. It was filled with exotic plants including hanging vines, orchids and banana trees. The focal point of the greenhouse was a large aquarium where two alligators shipped all the way from Florida in wooden crates, idled in warm water and delighted the curious visitors who came to see them. Apparently young Allie Walbridge delighted in frightening his six sisters by nuzzling alligator snouts on the back of their necks.

Walbridge only enjoyed his home for ten years when in 1897, he was killed accidentally at work in his power station. His wife continued to live in Lakelet Hall until her death in 1903. After this, the house was intermittently occupied by various family members. In the 1920s, it was advertised as a vacation resort with little success. Following the Depression, the family realised they could no longer afford to maintain the house which by this time was facing serious repairs; a hailstorm broke many of the greenhouse windows, brickwork was failing and the tower was unstable. In 1941, the entire building was demolished. As for the two alligators, their fate remains a mystery. Perhaps they were released into the Pike River; their ancestors still living in the murky depths!