No singing on the job

[FALL 2019] By Heather Darch From the early 1800s, tanneries where animal hides were processed to make leather were located along the Rivière aux Brochets in Missisquoi County. Early entrepreneurs had easy access to the river. They understood the potential for success with American leather markets via Lake Champlain to the south. This profitable trade… 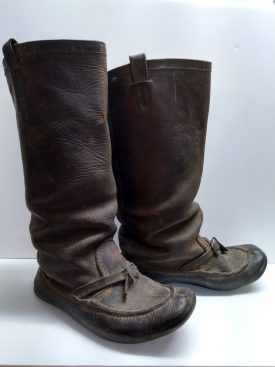 From the early 1800s, tanneries where animal hides were processed to make leather were located along the Rivière aux Brochets in Missisquoi County. Early entrepreneurs had easy access to the river. They understood the potential for success with American leather markets via Lake Champlain to the south. This profitable trade resulted in the town of Bedford enjoying the distinction of being one of the largest producers of leather in Quebec beginning in the 1830s.

1804 saw the establishment of grist mills and saw mills beside the chain of rapids that stretched for nearly two kilometres. The rapids hindered travel, but were important for creating power. In all, five dams to control the water were constructed across the river. This gave Bedford its initial impetus for growth and economic prosperity.

Like the mills, tanneries required water to power their machines. The abundance of hemlock trees along the river bank was also a key component. Animal hides soaked in vats of tannic acid made from hemlock bark gave the leather a distinctive red-brown colour. The first tannery in Bedford was opened by Nathaniel Brown on the north bank in 1824. He sold it to Robert Jones who relocated the business to the first dam on the south bank by 1831. From this site a succession of owners developed a lucrative business.

Rodney Burke and John Hobart acquired the tannery in 1832. They shipped thousands of pounds of leather products from the wharf in Pike River (known as Lower Falls) to New York. The tannery was destroyed by a spectacular fire in 1838 and Burke and Hobart were forced to declare bankruptcy in 1844. Robert Jones rebuilt the business and sold it again in 1861 to Henry Ross who partnered with Nye Martin and Ebenezer Alcombrack. The “Martin and Alcombrack” tannery is described in the 1871 business directory as the manufacturer of “sole, upper leather, harness and other leathers.” By this time, the tannery extended over 400 acres of land and produced $40,000 worth of leather annually. An 1869 contract for employees reveals the working conditions of the tannery under Messrs Martin and Alcombrack:

We, the undersigned do agree to work for ten hours per day for a day’s work; to attend strictly to our work, indulging in no singing nor talking except on subjects concerning our work. Commencing in the morning at 7 o’clock and work until 6 o’clock, one hour out for dinner. Any man must give three weeks notice when he intends to quit and the employers will do the same when they wish a man to quit. Also employees must agree not to smoke around outside the tannery or in the tannery limits… If any of these rules are violated, those guilty of the same are liable to be thrown out of employment immediately.

Traditionally Quebec’s leatherworkers were not members of trade guilds. They worked long days in unsanitary and malodorous conditions and as the contract indicates. They had little time for simple pleasures like chatting to co-workers or singing a merry tune. Manufacture of leather involved strenuous work as raw hides were scraped and then soaked in a lime mixture, tanned in the hemlock bark solution and finally dried and stretched until they were pliable and ready to use.

Martin and Alcombrack tannery outsourced some of their work to smaller tanneries like the Barney and Briggs tannery in Stanbridge East in order to meet their demand. The Bedford tannery also supported a substantial network of related businesses such as shoe and harness makers, sawmills that supplied the hemlock bark and butchers who delivered the carcasses.

The late 19th century saw improvements in the tanning process including replacing bark tannin in favour of chrome-tanning. This saved time and improved product quality. Martin and Alcombrack did not initiate the new processing nor did tanneries across Quebec in general until 1910. This decision may have factored into the overall decline of tanneries across the province. One can only hope that the “no singing nor talking” rules were disobeyed on occasion by weary workers. But the no smoking rule most likely was broken as the Bedford tannery burned to the ground in 1911. It was never rebuilt and the booming tannery industry that was once so important to the region disappeared.