I was « surprised by joy » when the opportunity arose for me to interview the lovely and gracious Louise Penny. Her 12 published books have already created quite the buzz internationally, let alone in the Eastern Townships, so it was only fitting that we meet at the Buzz Café to discuss her connection to… 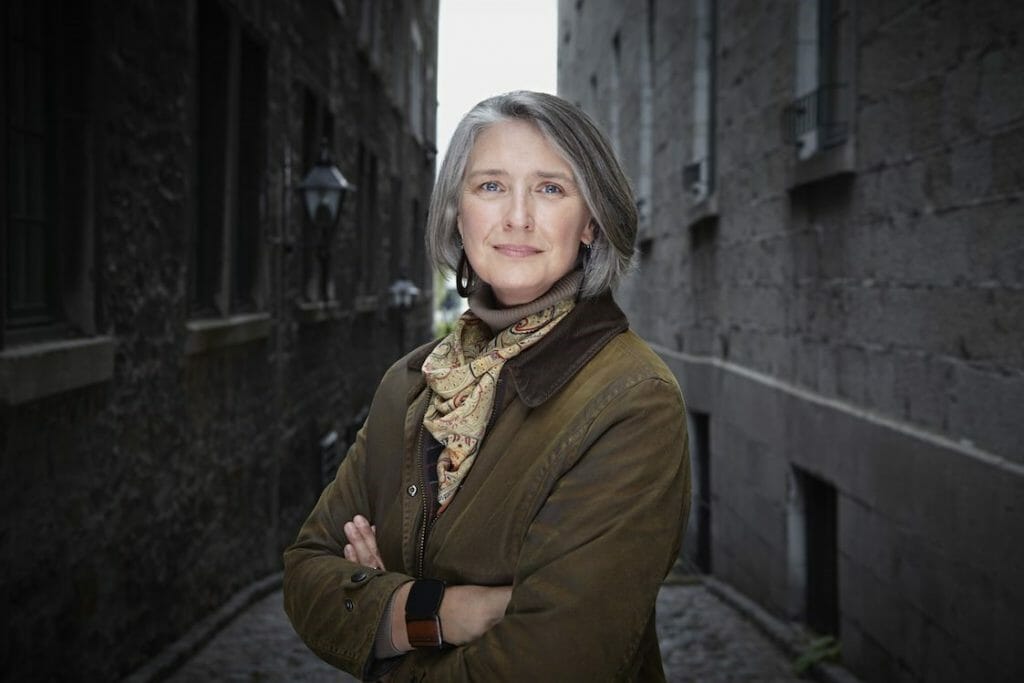 I was « surprised by joy » when the opportunity arose for me to interview the lovely and gracious Louise Penny. Her 12 published books have already created quite the buzz internationally, let alone in the Eastern Townships, so it was only fitting that we meet at the Buzz Café to discuss her connection to this region and where she has found inspiration.

Louise Penny is a best-selling New York Times author of 13 books written here in the Eastern Townships just a mere hour from the city of Montreal.  I live minutes away from Louise Penny and her fictional village of “Three Pines.” When I asked her if this hidden gem of a place to live had inspired her to write these wonderful mysteries she replied « it is like writing love letters to myself” and then she described how this area, this fabulous sense of place has sparked her imagination.

When she married her now-late husband Michael, they wanted to live in a place where they could create a new beginning, so they chose the Townships. Never could they have imagined what an unbelievable sense of community they had settled in and such a beautiful area on which she has based her “Three Pines” mysteries.

To write this article, I re-visited her books, “A Fatal Grace” and “The Long Way Home.” What a gift to discover the richness of humour, how she uses all the senses, the tantalizing food from the Bistro, and to get to hang out with Gamache, his wonderful wife Reine-Marie, Jean Guy, Clara, Peter, Myrna, Ruth, Gabi and the Ruth’s duck.

This trip led me into the inner lives of the characters where they bare their souls, their deepest fears of love, jealousy, addictions, and their irresistible friendships.
One of the questions that a writer often hears is with regards to their writing habits. Louise is pretty disciplined. “I always write in the mornings after I have taken my dog out, and complete my daily goal of writing 1,000 words. Some days I flow through this exercise and it takes a few hours. On these days I love the craft of writing. On other days, it might take me 8 or 9 hours to reach that goal and the craft of writing is more difficult but that is the nature of the beast.”

Her strong friendship with Lucy and Danny McCauley, owners of Brome Lake Books, is quite amazing. Louise met Lucy before they bought the store, when Lucy was working for the previous owner. She had also met Danny but when they became the owners, their relationship just clicked and they were behind her all the way, even when only a few people showed up for book signings.

Whether it is Knowlton, Sutton, West Brome, Waterloo, Cowansville, North Hatley, Quebec City and Charlevoix, Louise with her maps and contests have attracted hundreds and hundreds of people to the region. As a matter of fact, the very night before I was to connect with Louise, I was paying my bill at Le Relais when I heard someone behind me talking about “Three Pines,” so naturally I spoke to her and asked where she was from. She was from Perth, Ontario and “Three Pines” was the reason for their trip to Knowlton. When I told her I was interviewing Louise the next day at the Buzz Café, I told them they had a chance to meet her. So there they were waiting for us the next morning and Louise was delighted to sign one of her books.

Our tiny hamlet in the Eastern Townships is now the epicenter of all things related to “Three Pines.”  In August, Louise launched her thirteenth mystery novel “Glass Houses” at Brome Lake Books where 350 tickets sold out within an hour! Soon after, it hit #1 on the New York Times and Globe and Mail lists, making it the most popular book in North America! I suspect more people will flock to “Three Pines” now!

Visit Brome Lake Books in Knowlton or www.bromelakebooks.ca to see The Three Pines Inspirations Map of the Eastern Townships!