Because I am British-born, if and when I reach 100 years of age I can apply, via the Governor-General, for a birthday message from the queen (or king). Sadly, this does not apply to a house, so I had to think of another way of marking the centenary of my house at 18 Maple. I…

Because I am British-born, if and when I reach 100 years of age I can apply, via the Governor-General, for a birthday message from the queen (or king). Sadly, this does not apply to a house, so I had to think of another way of marking the centenary of my house at 18 Maple. I could not make it a big enough cake; a card did not seem special enough. So I settled on doing a history of the house. This, in many ways, became more a history of peoples’ memories than a history of its “bricks and mortar”, cedar and cement, in my case.

For the hard work of finding and sifting historical documents I made use of the services of Héritage Sutton. Jeanne Morazain and her colleagues put together a detailed dossier revealing not only the Sutton notable who built the house but his genealogy, too, plus the complicated lineage of conveyances which eventually passed the house along to me, the fifth family to be its owner. Over the years the house has fulfilled many roles, including the source of revenue for a charity, as home to the owners of one of Sutton’s best-known stores, providing seasonal lodging for skiers and patrollers, and finally, for the past 20 years, as a classic bed and breakfast. 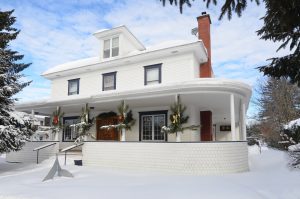 Since I became the owner, a number of locals have mentioned to me that they recall the house from their childhood. Consequently, in order to add the human-interest meat to the dry factual bones of the house, I contacted many of those people. From one neighbour I learned that, as a boy in the early 1950s, he would transfer multiple cords of wood through a basement window for the furnace here, all for the princely sum of $3. He also recalls the existence of a barn in what is now the garden, where a horse was stabled, and also a mink farm on the property next door. Another recalled the deliveries he made here, so we also know that the Montreal Gazette was the newspaper of choice at this house in the early 1960s. By sheer chance a guest staying at the B&B asked if his mother might come for a visit to the house; from her we heard of her doctor, whose surgery was a room on the ground floor, an unexpected titbit of information.

I did some research myself, too, and discovered that the still- functioning cast-iron radiators had been cast in Ontario, a place which, at that time, was a centre for the new-fangled water-circulation heating that was developed in the late 1800s. I also learned about floors designed to accept a central rug, an arrangement thought to be much healthier than wall-to-wall carpeting.

It seems that the nice folks from which I bought the house had originally wanted to buy the building at 1 rue Pleasant. But, in a twist of fate, they abandoned the idea in favour of buying 18 Maple. It is thanks to them that the house was converted from a boarding house to a B&B, whilst conserving it, essentially as built. Thanks to their care the woodwork is all intact and restored, and the magnificent verandah that occupies two full sides of the house remains. Apparently the B&B was nearly called l’Iris, after a favourite flower; they instead plumped for Vert Le Mont, a play on words suggested to them by a friend. They named it Vert Le Mont, and it has been Vert Le Mont to this day.

It has been my home, as well as my business, for 12 years. During those years I have done my own share of restoration and renovation, always trying to preserve the integrity of the original house. The original windows were finally removed last year, but the replacements are nearly identical. Did you even notice?

All these threads have been brought together in an article entitled 18 Maple, Sutton, by Jay Sames, which appears in the current edition of Héritage Sutton’s History Sketchbooks No. 25. Buy it, read it, and enjoy my gift to this house, a classic building of its time and a fixture on Maple Street since 1916.

The Héritage Sutton Historical Society publishes two Cahiers d’histoire/History Sketchbooks annually. The latest booklet can be purchased at Le Cafetier in Sutton as well as at La friperie Les bons débarras, boutique Nath’elle and the tourist office. Les galeries Farfelu and Art libre maintain an inventory of all 25 volumes that can also be obtained directly from Héritage Sutton at heritagesutton@gmail.com. Each booklet sells for $5.00. For the summary of each booklet, consult the web sitewww.heritagesutton.ca where you will also find old photos, a Youth Page and access to our archives.