The first Canadian Parliament began in a noble fashion on November 7th 1867 with the Throne Speech delivered by the Right Honourable Viscount Monck. Among the measures that Lord Monck presented in his reflections on the Act of Union was the promise to develop a « scheme of militia organization and defence. » There to… 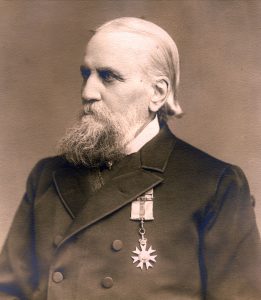 The first Canadian Parliament began in a noble fashion on November 7th 1867 with the Throne Speech delivered by the Right Honourable Viscount Monck. Among the measures that Lord Monck presented in his reflections on the Act of Union was the promise to develop a « scheme of militia organization and defence. »
There to hear the speech on Parliament Hill was Brown Chamberlin, the first Member of Parliament for the electoral district of Missisquoi County in the Province of Québec. A representative of the Conservative party, Chamberlin, won his seat by a 600 vote margin over the long-serving politician Philip Henry Moore. Mr. Chamberlin was particularly interested in « the scheme » of an organized militia and a defended border as he had witnessed the disorganized and embarrassing response of the military to the first Fenian raid into Missisquoi County the previous year.
Brown Chamberlin was born on March 26, 1827 in Frelighsburg, Québec to physician Dr. Brown Chamberlin and Diantha Knap. Chamberlin grew up in Frelighsburg and attended the local grammar school as well as a private school in Montréal. He studied law at McGill University where he received a Bachelor of Civil Law degree in 1850 and a Doctorate of Civil Law in 1867. He served as an elected fellow of the University and also received an honorary Master of Arts from Bishop’s University in Sherbrooke.
Chamberlin was called to the bar of Lower Canada in 1850 but redirected his career into journalism. He became a journalist for the Montreal Gazette and later, became one of its publishers. He also served as secretary to the « Board of Arts and Manufacturers of Lower Canada » and then served as its president. In this role, he attended the Great London Exhibition in 1862.
In Missisquoi County, Chamberlin was most recognized in his position as a military leader during the Fenian raid of 1870. Still sitting as a Member of Parliament when the Fenians decided to capture Canada for a second time, Lieutenant-Colonel Brown Chamberlin was also the commander of the local militia force known as the 60th Battalion. On May 24th 1870, the battalion received orders to move to Eccles Hill where it was determined that Fenian invaders would likely cross into Canada. Accustomed to false alarms, the men of the 60th took their time to muster; only 40 reported for duty on the morning of May 25, 1870. Fortunately, one of those in attendance was their commanding officer.
Lt.-Col. Chamberlin had the foresight to order Asa Westover and his home guard unit called the Red Sashes to patrol the border and position themselves at Eccles Hill until reinforcements could arrive. In a telegram to Westover he wrote: “Westover and Red Scarf Men should occupy old Fenian position at once, if possible, and pester the Hank of any party crossing. I go to Stanbridge by next train. B. Chamberlin, Lt-Col.” Chamberlin was able to supply reinforcements from the 60th Battalion for the Red Sashes and together they fired on the Fenians and held the borderline until the Victoria Rifles arrived to bolster their defences. For his action and bravery, Chamberlin was appointed the Companion of the Order St. Michael and St. George. Local pride swelled for the Frelighsburg boy who helped to save the country.
Soon after the raid, Chamberlin resigned his seat in the House of Commons, forcing a by-election, and accepted the position as the Queen’s Printer in June 1870 from his friend and Canada’s first Prime Minister, Sir John A. Macdonald. In books and legal documents from that time period the name Brown Chamberlin appears as « Law Printer (for Canada) to the Queen’s Most Excellent Majesty. » Chamberlin held this post until 1891.
At the age of 43, Chamberlin married the widow Agnes Dunbar Moodie Fitzgibbon. Mrs. Fitzgibbon was the daughter of famed writer Susanna Moodie and was herself a well-known artist and illustrator of the book « Canadian Wild Flowers, » published in 1868. Her collection is housed currently in the Department of Botany at the University of Toronto. The Chamberlins settled in Ottawa and were among society’s leaders in the newly established nation’s capital. Missisquoi’s first and very impressive M.P. died in 1897 in Peterborough, Ontario. In a photograph of Mr. Chamberlin taken later in life, he proudly wears his Companion of the Order St. Michael and St. George medal from the Fenian raid.

Sources: Let the First Session of the Parliament of Canada begin: http://www.cbc.ca/newsblogs/politics/inside-politics-blog/2013/10/flashback-let-the-1st-session-of-the-1st-parliament-of-canada-begin.html; Registrations of Deaths, 1869-1938. MS 935, reels 1-615; Archives of Ontario; Registrations of Marriages, 1869-1928; Series: MS932; Reel: 3 Archives of Ontario; The Fenian Raid of 1870 by Reporters Present at the Scene: Compilation attributed to Lt.-Col. Chamberlin; A Cyclopedia of Canadian Biography: Being Chiefly Men of the Time …, Volume 1 ed. G.M. Rose 1886.