There’s no denying it: artist Karina Jacobsen is obsessed with and on the lookout for patterns. “Patterns are like a song refrain for me,” said Karina in a telephone interview, speaking from her winter studio in Mexico. “It’s soothing to play with proportions and to rework a pattern, even sometimes ad nauseam. To grapple with… 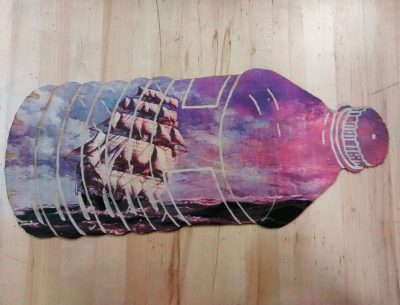 Message in a bottle by Karina Jacobsen

There’s no denying it: artist Karina Jacobsen is obsessed with and on the lookout for patterns. “Patterns are like a song refrain for me,” said Karina in a telephone interview, speaking from her winter studio in Mexico. “It’s soothing to play with proportions and to rework a pattern, even sometimes ad nauseam. To grapple with deeper issues.”

These deeper issues are tied to the environment and to its neglected state. Broadly speaking, most of Karina’s colourful, bold, and eye-popping designs are imbued with a subtle but poignant political or environmental message. For example: the water bottle. “It is a loaded icon,” agreed Karina, “which is why I chose to work it in various projects to provoke a discussion about humanity and its failure to do something concrete about our planet.” That being said, Karina is not one to preach. “I don’t pretend to have the solution,” she said candidly. “My art is not meant to create guilt among viewers. On the contrary, I am always attracted to aesthetically rich patterns that sparks joy in me and, sometimes, in others.” 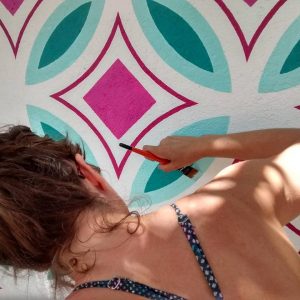 Karina volunteered to paint a mural in an independently run school set in an old house in El Salvador. Although she concedes that it was an act of beautification, she argues that there is deeper meaning to be found in the act of painting a mural. “It brought a certain sense of coziness to the school,” recalled Karina. She also painted a piano on the street in Montreal. It was a memorable experience. “People actually played the instrument while I was painting it,” said Karina with a light laugh. “Parents and their children came back to watch the progress and chat with me. You don’t get that kind of experience in the studio. That’s the power of art: to bring people together and to spark joy.”

Although Karina explores what could be dubbed “dark” themes, she does so in a light-hearted manner that speaks volumes about her sense of humour. “I like to do things tongue-in-cheek,” said Karina. Her patterns are always used for a twisted impact. For example, her art book titled Proof We Are a Couple, part diary, part testament, is a visually stunning investigation into what should or should not constitute “legitimate” intimacy. It could be construed as a response to the immigration process, one which Karina knows quite well, as she moves back and forth between Mexico, Montreal and Sutton.

The artistic experience of creating the art book was intriguing. “I designed a bed-like book and put a linocut print of my boyfriend and me in a spooning position,” said Karina. “It’s a personal project, one that exposes me. For instance, I even have my socks on! I added a dictionary with an entry on Domestic Bliss Dialect Dictionary to drive my point home.” Yet another project, a plastic bottle-inspired clock that is hilariously titled No time to waste, once again taps into the unconscious about human responsibility, helplessness, and despondency. 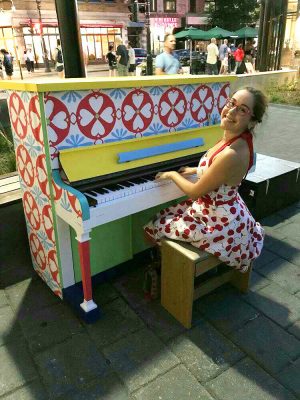 Karina is evidently multi-talented, dabbling with embroidery, Photoshop, block printing, and so much more. A self-proclaimed Mexican enthusiast, Karina is in love with Mexico and all that it stands for. Case in point: she made an art book depicting everything that made Mexico endearing to her. Picture naked lightbulbs dangling on a thread, Corona-sponsored plastic chairs, and Volkswagen Beatles. The book, titled Mexico Mio (which can be translated to “My Mexico”), is a testament to the beauty of life, even if it is imperfect. “Where art can provoke joy, it can instigate expression, trust, and healing. I want to keep exploring that,” concluded Karina.

Visit her website or in July, pass by Le Cafetier in Sutton to see her exhibition.