Why build a passive house?

Have you ever walked past someone sitting in their parked (but running) car on a hot, summer day? They sit in air-conditioned comfort as the car’s motor pumps heat into the already scorching air. This is a pretty good analogy for the way we build homes today and how that approach contributes to the woes… 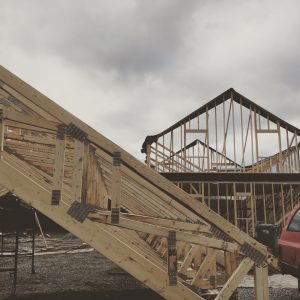 A passive house under construction

Have you ever walked past someone sitting in their parked (but running) car on a hot, summer day? They sit in air-conditioned comfort as the car’s motor pumps heat into the already scorching air. This is a pretty good analogy for the way we build homes today and how that approach contributes to the woes of our ever-warming planet. In winter, we barely manage to keep our interiors comfortable, aiming for 20 degrees although the temperature near the ceiling is closer to 25 and the floor always seems freezing (to me). Meanwhile our hydroelectric dams or, heaven-forbid, nuclear or coal-burning power plants struggle to keep up. North American buildings account for more than 40% of all the energy we use and a third of our C02 emissions. Surprisingly, they are far more damaging to our environment than our vehicles.

Perhaps the question ought to be why not build a passive house?

For the uninitiated, a passive house (not to be confused with a passive solar house) is a building that is ultra energy efficient — in the neighbourhood of 90% more efficient than most Canadian homes. The concept originated in Saskatchewan in the 70’s but was popularized by a Swede and a German in the late 80’s. In a nutshell, a passive house is an airtight, superinsulated building with high performance windows. The Passive House Institute (PHI) doesn’t mind how you achieve it, they just want the building to consume less than 15kwH/m3/year in heating or cooling, use less than 120 kWh/m2/yearin total energy and leak less than 0.6 times the building’s volume of air per hour (for the sake of comparison, 1.5 is the new Novoclimat threshold).The standards established by PHIUS, an offshoot of PHI, take into account the fact that we don’t all live in temperate, gray, central Europe. Their standards are extremely stringent while allowing for the fact that Canada’s temperatures span 65 degrees Celsius to Germany’s 30. As an afterthought, we also consulted LEED and, with some careful management of lumber, the house should hit Platinum. 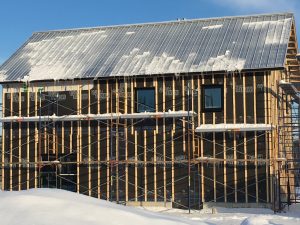 The airtightness and the amount of insulation required to make a PHIUS house may seem ludicrous but is it any crazier than paying to heat the outdoors — the outdoors we’re desperate to cool down? In an airtight, superinsulated house we could be comfortable all year round AND reduce our energy consumption by 90%. It’s good for the wallet AND for the planet.

Yes, it’s a serious technical challenge. Yes, it’s more expensive at the outset but the extra 10-20% is going to look like peanuts when energy costs rise and yours don’t.

– The air in the house will always be fresh and healthy (because it is being supplied directly from outside and not being sucked in through all the building materials).

– The house will be incredibly quiet.

– We will never have cold feet (or cold anything) again.

Last fall,we spent a weekend at a PHIUS conference in Philadelphia and it was a real eye-opener. The presenters — designers, architects, developers and builders — talked about their projects at length, as you would expect. What we didn’t expect is that they talked most about their failures.They talked about their painful lessons – in vivid detail. There were no trade secrets, just a genuine desire to further the collective progress. PH is recognized as a “movement” — people going above and beyond current building codes to create healthy homes that last and that aren’t a drain on the planet. It is an open-source community of people sharing their building experience, in all its minutiae, to further the cause and we’re proud to be a part of it.