« The Canadian » ( from Toronto to Vancouver)

Shortly after my wife and I boarded the Canadian in Toronto for its four-night journey to Vancouver, a steward introduced us to our bedroom—an L-shaped sofa and coffee table that give way to a double bed (fine for me, but a bit small for my wife), a well-appointed bathroom with full shower, and an oversized… 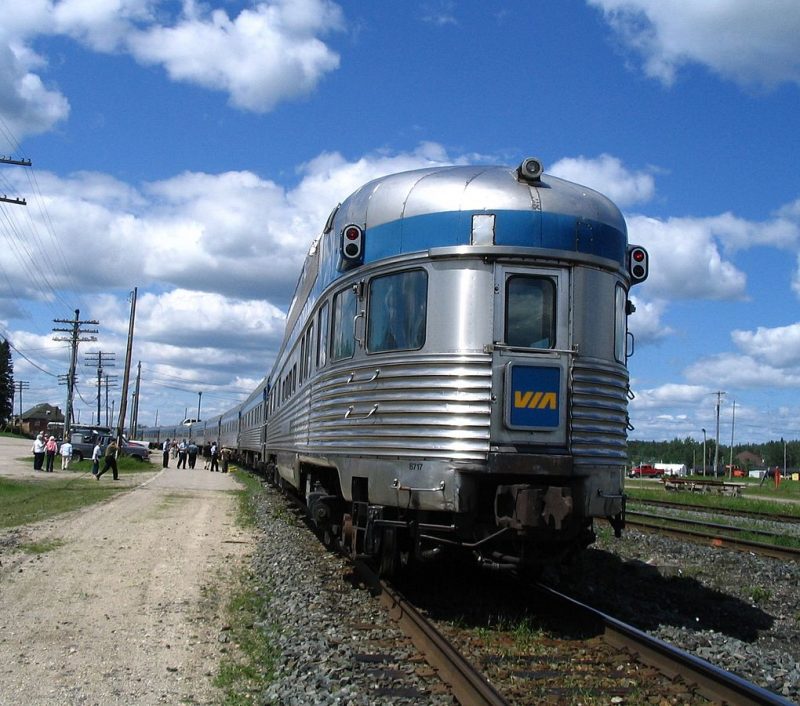 The end car of « The Canadian » (source: wikipédia)

Shortly after my wife and I boarded the Canadian in Toronto for its four-night journey to Vancouver, a steward introduced us to our bedroom—an L-shaped sofa and coffee table that give way to a double bed (fine for me, but a bit small for my wife), a well-appointed bathroom with full shower, and an oversized picture window. We were 110 passengers (70 in sleepers) in a 13-car train.

A couple of hours after boarding we walked next door to the dining car for the second sitting for lunch. We joined a couple sitting at a four-person table covered by a starched white tablecloth laid with solid cutlery and good glassware. We introduced ourselves. They were Robert and Daphne Smythe. He was a fit 95-year-old Toronto philanthropist. He had been married to his lovely, casually elegant, girl for 68 years. They met in college on a blind date. He had to phone her afterwards to apologize for forgetting what she looked like and asked for “a second look.” She was so impressed by his effrontery that she said OK.

We much enjoyed our lunch and chose to have the rest of our meals together. We are corresponding now. We soon found that long-distance train travel creates an unlikely community of diverse strangers. An intimacy occurs that would be unthinkable in any other context.

Here are a few of us:

Harold— A sixty-year-old professional bass player from Toronto  ( a “vieux rocker”) who was accompanying his muscularly disabled brother, Joseph, on their annual trip to visit with their older brother.

Abebei— A stunning six feet 30-year-old Nigerian woman who works in the insurance industry in the UK. She has chosen to take a few days of her annual vacation to do this. Abebei has a ready smile, and a throaty laugh that she is happy to share. She says the whole thing is “a trip.”

Alan and Joan from Atlanta, Georgia—He’s a fit 70-year-old cement and landscaping contractor who for 25 years has done all such work at the Masters Golf Course -though he has never played a round of golf. This trip marks their 50th wedding anniversary. He’s been here often as a big-game hunter. They lost an 18 yr. old son in a car accident. She said that she immediately perceived a similar hole in me, in spite of my “happy demeanour.”

Huguette— A 60-ish largish woman from Chicoutimi who skillfully steers her small, slight and blind husband Pierre from dining car, to bar car, to bed. He enjoys the observation car where she whispers to him an artful description of our sights. They do the trip annually.

Gaston—a substantial man of my age, travelling alone. We met in the bar where he seemed to be a unilingual francophone until he had drawn out several of us who were comfortable in French, and  then switched to barely accented English. He was from Temogami, Ont., where he first worked as a draveur for his grandfather who owned a sawmill. That led, obviously, to managing the Monument National theatre in Montreal, and thence, naturally, to twelve years as a professor of French in university.

Linda—From Sept Iles, is 5% sighted. She worked all her life as a counselor/administrator in programs for the disabled. She does this trip five or six times a year. The Canadian makes her retirement a joy. She was very happy to find some fellow French speakers on board as she says her English is only enough “to get by.”

Jerome — A handsome, smiley, carefully groomed sixty-ish who is severely afflicted with Parkinson’s. Once on board, he sets aside his walker for his several  cross-country train trips a year. Says, “it’s a cinch, with 200 caregivers on board.”

That’s when we realized that train travel is ideal for those suffering from mobility issues. It’s one long corridor that can be fairly safe between first-rate amenities for food, drink, and accommodation, all within the company of good conversation with strangers. We further learned that some qualify for an extra ticket for a caregiver.

Food and drink: all food is cooked fresh on board from a morning omelette or French toast, to shrimp/scallop skewers at lunch through to fresh salmon or a veal chop at dinner. Our vegetarian friends were happy with their choices.

Beers and wines are all Canadian and reasonably priced.

The service is reliably efficient and cheerful. Many of the staff are based in and around Winnipeg where the crew changes. All bilingual, of course. It was unanimously agreed that we were being very well looked after by very good people. The bars are open from 11 AM and close, mercifully, at 11 PM, and drinks can be served up in the dome, eh! Fruit, cookies and stuff are available at all hours.

I’ve had the good fortune to drive across the country but was unprepared for the immediate beauty of the landscape offered by the train. Through the wilderness of northern Ontario, over rushing streams and endless lakes, we watched wildlife scattering away from the track. The prairie light amazed us all, and the drama of the trip through the mountains was stunning beyond words.

There can surely be no better way to see the grandeur of our country and to enjoy the rich diversity of our people.

To read some of Peter Turner’s stories, get his book at peterturnerstories.com or read the short versions at journalletour.com/?s=peter+turner.